Cahillites Best the Hawks and Progress to the Catholic League Championship

The Roman Catholic Cahillites advanced to the Philadelphia Catholic League final after defeating the St. Joseph’s Prep Hawks 69-66 on Wednes

The St. Joseph’s Prep Hawks improved to 16-4 on the season on Friday, February 2 after a dominant 88-53 victory over their rival, the La Sal

This tree called “Philly Basketball” has many branches indeed. Kelly Fieldhouse, on the campus of St. Joseph’s Prep, was the appropriate pla

SJP versus GA at Jefferson University 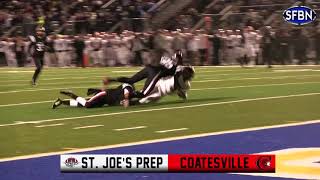 St. Joe’s Prep rallies and holds on to defeat Coatesville, advance to Hershey

DOWNINGTOWN - Two of the best teams in the entire state of Pennsylvania clashed at Downingtown West’s Kottmeyer Stadium Friday night, and ne

Archbishop Wood Falls to The Prep at the Final Whistle

Catholic school football is in a league of its own, literally and figuratively. The energy at the game on Friday night was off the charts, w